Despite labor’s historical stronghold in the Midwest – Indiana, Michigan, Iowa, Tennessee and now, Wisconsin – have become Right-to-Work (RTW) states.  Is Illinois next?  What does this mean for employers?

RTW In a Nutshell: Money and Power

In the 25 states that have not passed RTW laws, including Illinois and Missouri, a union security clause in a collective bargaining agreement requires all employees in the bargaining unit to either be a dues/fee-paying union member – or a non-member who pays “fair share” fees.  The battle is over the non-member “fair share” fees which are used to supplement dues cash flow used for, among other things, local and international officer salaries, overhead costs and political lobbying.

In the 25 states that have passed RTW laws, a non-member at a unionized workplace is no longer required to pay any fees to the union – even if s/he is benefitting from union representation.  Financially, RTW is a major blow to unions.  From an organizing standpoint, it is equally damning.  An individual is far less likely to become or remain a union member if s/he can benefit from representation without having to pay.  After all, a union owes a legal duty of fair representation to all individuals in the bargaining unit – regardless of member status.

Missouri: Even if the RTW bill before the Missouri legislature fails this year, GOP representatives are celebrating.  Last month, in a 91-64 vote, the House approved a RTW bill.  Despite the possibility of defeat in the Senate and expected veto of Gov. Jay Nixon, the RTW movement has clearly gained significant ground.  It would only take 109 votes in the House to override a veto.

Wisconsin:  Last week, a group of unions filed suit to challenge the recently enacted RTW law.  Notably, union challenges to the constitutionality of RTW laws in Michigan and Indiana have failed.

Kentucky:  Under home rule, in December 2014, Warren County, Ky., adopted a countywide RTW ordinance after it became clear the state legislature was not going to pass a RTW bill.  Since last year, 11 counties have passed local RTW laws, including several along the Tennessee border.

What to Expect Right Now

Expect an uptick in union activity as unions ramp up “internal organizing” to prove that membership has its benefits.  Frontline management will also likely receive increasing questions from employees about what all of this means.  Now is the time to consider re-training your supervisors and managers about what they can say and do when these discussions arise.  Finally, stay tuned as these legal and legislative battles continue to develop.

On November 6, Indiana’s right-to-work law cleared its most recent major hurdle. The Indiana Supreme Court upheld the law overturning a Lake County decision declaring the law unconstitutional. The Seventh Circuit upheld the law in September. Meanwhile the Michigan Supreme Court announced it will hear argument in January on whether its state’s right-to-work laws properly apply to state employees.

So, Indiana and Michigan and twenty-two other states (the entire south plus several states in the west) now have right-to-work laws on the books and several others have considered similar legislation. But what does “right-to-work” really mean for employers?

Contrary to popular belief, right-to-work laws do not ban unions, displace employment-at-will or guarantee employees a “right” to continued employment. Rather, they prohibit “union security clauses” – provisions in union contracts and collective bargaining agreements that require union membership as a condition of employment. Indiana’s right-to-work law, for example, which is fairly typical, makes it unlawful to require an employee to: (1) join or remain a member of a union; (2) pay union dues, fees or assessments; or (3) make a charitable donation in lieu of paying union dues. The law also invalidates union agreements that violate the law and makes knowing violations a misdemeanor criminal offense.

The bottom line: In a right-to-work state, employees in union shops cannot be forced to join the union, but must be afforded the same wages and receive the same benefits and terms and conditions of employment as their union-member co-workers. Under federal law, once a union is recognized as a unit’s exclusive bargaining agent, the union must bargain on behalf of all employees in that unit, even those who choose not to join the union.

Reminder: EEO-1 Surveys Due To Be Filed By September 30th! 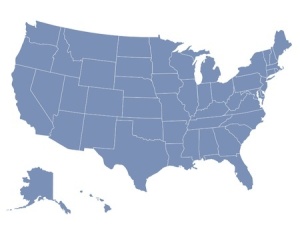 Arizona:  In July, the Attorney General confirmed that the AZ smoking restrictions do not apply to e-cigs.

California: Employers, get ready to start having to offer paid sick leave beginning July 1, 2015 if you aren’t already!  See our September 16, 2014 post for more details.  Also, beginning January 1, 2015, unpaid interns and volunteers are getting the same nondiscrimination and harassment treatment as paid workers, including non-harassment training.

Connecticut:  Starting October 1, 2014, workers may obtain certificates of rehabilitation related to their arrests and convictions of which employers are prohibited from retaliating against employees and applicants when they present one for initial or continuing employment.

Illinois:  In case you missed our other blog posts, effective January 1 2015, Illinois joined the ranks of the “Ban the Box” campaign, which prohibits employers (with 15 or more employees) from asking applicants about criminal records on a job application.  You cannot do so until they have either been selected for an interview or been given a conditional offer of employment (with a few select exceptions).  Also effective January 1, the Illinois Human Rights Act related to pregnancy was expanded (more than any other state) so employers must now reasonably accommodate any condition related to pregnancy.

Indiana:  On September 2, 2014, the right to work law was upheld once again – this time by the 7th Circuit Court of Appeals.

Missouri: The Missouri Supreme Court recently held that the state’s statutory cap on punitive damages is unconstitutional as is applied to certain common law claims. (Lewellen v. Franklin, case SC92871). The holding is limited to common law causes of action that existed when the Missouri Constitution was adopted in 1820.  In the short-term, this decision may raise the cost of litigation as plaintiff’s attorneys will undoubtedly try to add common law claims to employment lawsuits hoping that the threat of unlimited punitive damages will result in more generous settlements.  However, given that traditional common law claims have been increasingly difficult to sustain in the employment context and have been largely supplanted by statutory and more recently-recognized common law actions, Lewellen is ultimately unlikely to raise the stakes for Missouri employers.  Read more about this here.

New Hampshire:  Beginning January 1, 2015, employers have a new mandatory poster requirement for equal pay and smoker rights non-retaliation, as well as, employers may not prohibit employees from discussing pay wages or retaliate against them for doing the same.

Oklahoma:  OK jumped on the band wagon by prohibiting employers from requiring employees to give up their personal social media log-ons and passwords, effective November 1, 2014.

Yesterday the Supreme Court upheld Michigan’s ban on affirmative action programs overturning a 6th Circuit Court of Appeals decision which had ruled the ban an unconstitutional violation of the U.S. Constitution’s Equal Protection Clause. The text of the opinion is found at http://www.supremecourt.gov/opinions/13pdf/12-682_j4ek.pdf

Michigan’s ban on affirmative action was enacted as Article I, Section 26 of its State Constitution and, in relevant part, prohibits governmental entities, including public colleges and universities, from granting preferential treatment on the basis of race, sex, color, ethnicity, or national origin. Michigan voters passed the ban in response to a pair of 2003 U.S. Supreme Court decisions. Gratz v. Bollinger struck down the University of Michigan’s undergraduate affirmative action program as unconstitutional while Grutter v. Bollinger upheld the more limited affirmative action program used at the University of Michigan’s law school.

Justice Kennedy made clear the decision does not outlaw affirmative action. This case, he said “is not about the constitutionality or the merits of race-conscious admissions policies in higher education.” This opinion does “not disturb the principle that the consideration of race in admissions is permissible, provided that certain conditions are met.” The question here, he explained, is “whether, and in what manner, voters in the States may choose to prohibit the consideration of racial preferences in governmental decisions, in particular with respect to school admissions.”

The decision distinguished cases in which voter-approved bans had a “serious risk, if not purpose, of causing specific injuries on account of race” citing cases dealing with voter-approved bans on fair housing measures and busing aimed at desegregating schools. Those bans remain unconstitutional, the Court reasoned, because they encouraged discrimination. The Court viewed the Michigan ban differently, stating the “question is not how to address or prevent injury caused on account of race but whether voters may determine whether a policy of race-based preferences should be continued.” Here, the Court concluded, “there was no infliction of a specific injury” and declined to extend its prior decisions “to restrict the right of Michigan voters to determine that race-based preferences granted by Michigan governmental entities should be ended.”

The Court focused on race-based affirmative action programs in public higher education, but the long term effects of the ruling are likely much broader. As the Court noted, similar bans exist in other states. To date seven other states, California, Florida, Washington, Arizona, Nebraska, Oklahoma and New Hampshire, have bans similar to Michigan’s. The case represents another blow to what remains of affirmative action programs in general and paves the way for other states to enact similar bans.  However, employers with affirmative action obligations based on their status as a federal or state contractor should note that this decision in no way removes those obligations.

Arizona Min. Wage:  Be sure you’ve increased minimum wage to $7.80.

Georgia Criminal Records:  In July, arrest and criminal records access is going to change. For example, access will no longer be for any arrest and employers must supply either fingerprints or detailed information regarding the individual, such as full name, address, Social Security number, race, sex, and date of birth, which is accompanied by a signed consent on a form approved by the Georgia Bureau of Investigation’s Crime Information Center.

Illinois Workplace Violence Initiative:  The Illinois Chamber of Commerce is actively working on legislation that will give employers an avenue to get temporary restraining orders when persons cause threat of violence in the workplace.   Stay tuned for this much needed legislation!

Michigan Employee Private Social Media:  In December 2012, Michigan joined the bandwagon of prohibiting employers from requiring employees and applicants to give up their social media logins and passwords and from taking adverse action against them should they not comply with the request.  Effective March 28, 2013, Michigan will become one of our nation’s right to work states.  So, generally, employers cannot require employees to join or remain a member of a union.  Finally, you may now be able to collect a minimal administrative fee (i.e., $1-$2) for child support garnishments each time a deduction is made.

Missouri Min. Wage:  Minimum wage is raised to $7.35 an hour – be sure you’ve made this increase!

New Jersey Posting Requirements:  If you have 50 or more employees, there are new notice and posting requirements in place from the New Jersey Department of Labor and Workforce Development and Department of Law and Public Safety’s Division on Civil Rights for gender equality in the workforce and anti-discrimination.

State laws change every day.  Make sure you are aware of them all for the states in which you have employees!